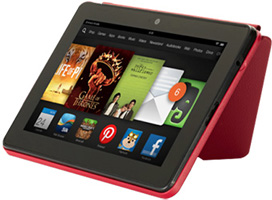 With AVS4Mac iTunes to Kindle Fire HDX Converter, you are now free to watch iTunes videos on Kindle Fire HDX tablets. But you may still scramble to buy 7-inch version or 8.9-inch version. Most of the specs are the same across both sizes. Thanks to a top-notch 2.2GHz Snapdragon 800 processor, both have three times the performance. They also double the memory, up to 2GB, and the Adreno 330 GPU gives them four times the graphics power.

But there are still many differences between the two sizes. Stop hesitating! There is no better way to see how something has evolved from a spec standpoint then by laying them out side-by-side.


The HDX display features dynamic image contrast, a unique feature that automatically optimizes the color of each pixel based on the amount of light in your surroundings.

Both the 7" and 8.9" Kindle Fire HDX tablets have a front-facing 720p HD camera, perfect for Skype HD video calls and taking photos to share via Facebook or e-mail.


But the 8.9-inch model also has a rear-facing 8-megapixel camera that can capture 1080p video, so it scores a point here.

What the pictures didn't tell us, however, was just how light the Fire HDX tablets are. Amazon describes it as "startlingly so".

Amazon claims the HDX will get about 12 hours of active battery life for surfing the Web, watching videos or listening to music. 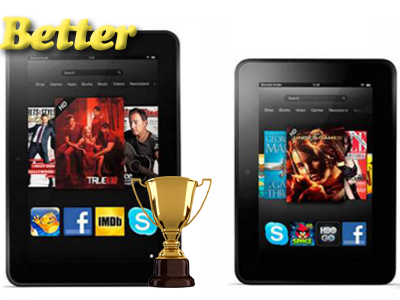 
Both versions are available now for pre-order. If Amazon can deliver on all its promises with its core apps, from email to the updated Silk browser, and can make the HDX into both the best vessel for Amazon content and something more besides, these two tablets are going to be hard to beat.


Note: The trial version of AVS4Mac iTunes to Kindle Fire HDX Converter only allows one minute conversion. You can purchase the full version with only $44.95 while the original price is $49.95.